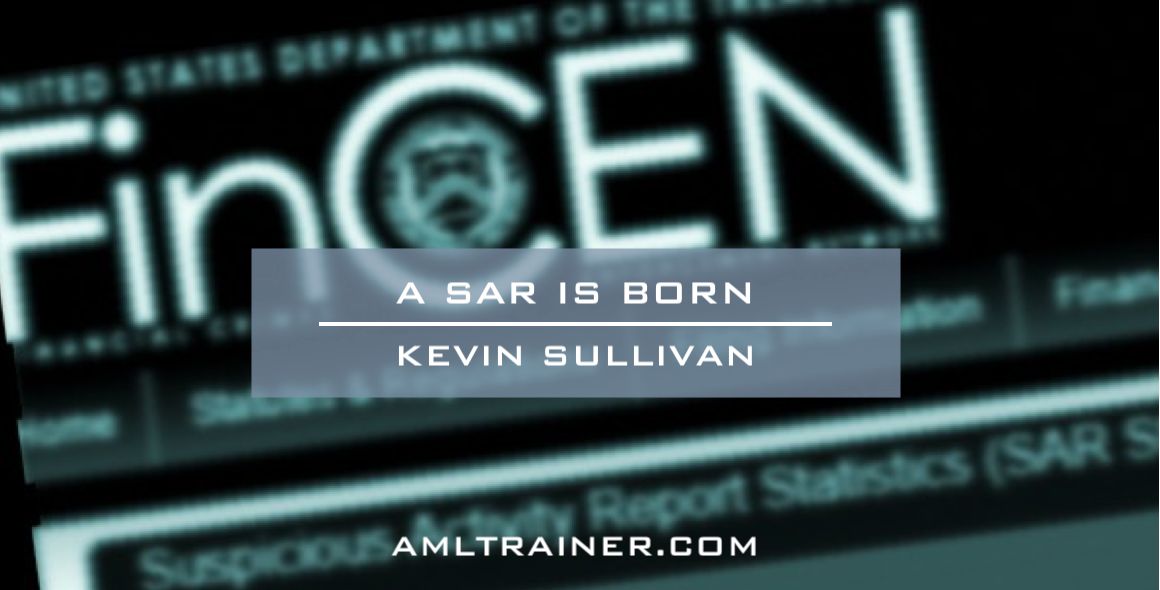 A SAR IS BORN

is an AML procedural topic that confuses many and harvests many varied positions and opinions. Most people having anything to do with a SAR or potential SAR have never seen one written by another financial institution and perhaps have never even seen their own since that duty may be delegated to a special SAR writing team within their own institution.  While I was an investigator with the New York State Police and the El Dorado Task Force I was in the unique position to read, examine, and analyze thousands of SARs in every possible permeation from numerous financial institutions. This allowed me to compare how various financial institutions wrote their SARs which included the good, the bad, and the ugly. Combining that and knowing what information law enforcement wants to see in a SAR along with running major law enforcement investigations provided me with a unique perspective on SARs.

The SAR, or Suspicious Transaction Report (STR) in many countries outside of the U.S., is the bane of AML’s existence. The SAR is the handshake between financial institutions and law enforcement. Much of the policies of an AML program are performed with the intention of providing law enforcement with a heads up if suspicious behavior is afoot. Fulfilling this intention and properly completing a SAR then becomes one of the most important functions that a financial institution can perform.

Note: The era of Suspicious Activity Reports (SARs) in the United States began with the Annunzio-Wylie Anti-Money Laundering Act of 1992, which required regulated financial institutions to report transactions that they suspected might involve illicit funds or purposes. The USA Patriot Act of 2001 upped the ante to include securities broker/dealers. Then in 2006, the Bank Secrecy Act (BSA) was amended to require certain insurance companies and mutual funds to begin filing SARs. RMLO’s in 2012 and housing GSE’s were mandated to file in 2014. Other industries have a voluntary SAR reporting status.

One of the most frequent questions I get—and that FinCEN gets—is, “When should I file a SAR?” The term suspicious, in and of itself, is a bit nebulous. There is no absolute, clear cut, without-a-doubt answer for this question. The fact is that “suspicious” depends on many factors. What is suspicious for one institution may not be for another. Much depends on the points of information garnered from the risk assessment performed on the customer, such as financial history, geography, product(s), other entities involved, frequency, economic sense of the transaction and/or incident, and let’s not forget the risk appetite of the financial institution.

Usually, an incident, “trigger”, or “alert” will be generated by the financial institution’s transaction monitoring computerized system. A system whose parameters probably have been set by the third-party vendor who sold and maintains the system in conjunction with the individual financial institution. These parameters are set differently depending on the type of financial institution and should be “fine-tuned” with regularity. There are two types of triggers: 1) The computer generated predetermined parameter that sets off a trigger or; 2) a human interaction, usually involving a vigilant employee at the first line of defense that sets off a trigger. The human interaction incident may not even get “scrubbed” through the computer system as it might not have been a transaction. For example, a customer facing employee notices something odd about a customer’s actions and reports same – no TM systems used. Perhaps the incident was someone trying to establish an account and upon gathering the potential customer’s KYC some giant red flag popped up that sent the hair on the back of the employees neck into a tizzy. So, not all alerts come from the computer monitoring system. In fact, some of the best triggers come via the human element. Whichever method caused the alert, the next step needs to be taken. That step is reviewing the alert.

The review begins with a human analyst who takes a look at the alert. The analyst might be able to determine very quickly, after a review, that the alert can be cleared. For example, a local florist deposits cash four times his norm on February 15. Unless there are other circumstances, Valentine’s Day may be the logical reason for the increase in cash deposits for the florist and the alert could be cleared. Other incidents may not be so easily cleared. The analyst may have to perform due diligence. At this stage incorporating the customers KYC info would be essential. The analyst should be looking for clues as to why this incident/transaction took place. A vertical and horizontal review on the customer should commence. That includes all his KYC info, previous transactions (all info that made up the customers risk matrix), open source info, and similar professions history to name a few. Does the transaction make sense based upon all that you know about the customer and his trends and patterns.  If the analyst cannot determine a reasonable explanation for the alert then it should be escalated. Note: the analyst will not be contacting the customer. Upon review, it might be determined to have the Relationship Manager (RM) or some front line personnel contact the customer. However, they must be fully aware of the “no tipping off” rule.

Depending on the size of the institution the path of an alert may vary. In smaller institutions the analyst may handle everything from initial review, to investigation, to SAR writing. In larger institutions there may be more layers in the process. Many larger institutions have created a new form called the “unusual activity report.” This was done for very specific reasons mostly having to do with terminology and timing. In the U.S., as per the Bank Secrecy Act (BSA), an institution must report to FinCEN any activity deemed suspicious within 30 days of the date of the incident being discovered, unless no subject is identified then you have 60 days to report. Typically larger financial institutions have multi-layered reporting processes. For example, teller to head teller, to assistant branch manager, to branch manager, to regional manager, to the financial intelligence unit, to the AML investigative team, to the compliance review group, to the SAR write up team, to submission to FinCEN…….whew!!!! By the time the suspicious activity in question reached the end of that administrative assembly line 30 days had past and the institution was in violation. So, in order to buy more time for the process to complete without getting jammed up by the regulators for failing to submit in a timely fashion, an ingenious idea was developed, the unusual activity report. The first line of defense and much of the second line of defense (customer facing staff and backroom staff) would no longer call an incident/alert “suspicious.” If the trigger could not easily be cleared after the initial analyst’s due diligence and review and it needed to be escalated, it would be deemed to be “unusual.” The term, “unusual” would remain as the incident/alert made its journey through the assembly line process until the end of the line. If at the end of the line the incident was still dubious, then and only then would the activity review team label it as “suspicious.” Now, the institution just bought themselves 30 days from this point to submit their SAR. I don’t know if that is what the AML founding fathers considered when putting together AML standards but I have to admit it is pretty ingenious to use a play on words to get more time. Why hire more people to get it done in 30 days when you can fall back on vocabulary. Brilliant…at least until the regulators put the kibosh on that.

Once a financial institution completes its’ investigation their results should be reviewed by senior management and/or the legal staff before transmitting it to FinCEN. FinCEN’s online format has made things a bit easier for both the filers and the reviewers. Every box on the SAR has a corresponding drop down list and there should be no empty boxes on a SAR that’s ready to submit. The most difficult part is the narrative section. This area, allows for approximately 17,000 characters and is the place where you get to tell your story. This is also the section that seems to give many people trouble. The usual question is, “What do I put here?”. I have seen everything from great to horrible in this area. Too much info, too little info, info that appears to be written in Greek, info that pertains to nothing, and info that contains a bevy of acronyms I’ve never seen before (and I worked for the government) and apparently are institution specific. A fundamentally good SAR narrative should contain the following:

Tips To Be a Rock SAR

I hope I have been able to shed some light onto a cloudy topic. My golden rules are:

I work with AML programs large and small, if you need a customized and quality anti-money laundering program, training, or advise I invite you to contact me to learn how I can help with your AML compliance. – Kevin Sullivan, CAMS, President of The Anti-Money Laundering (AML) Training Academy.