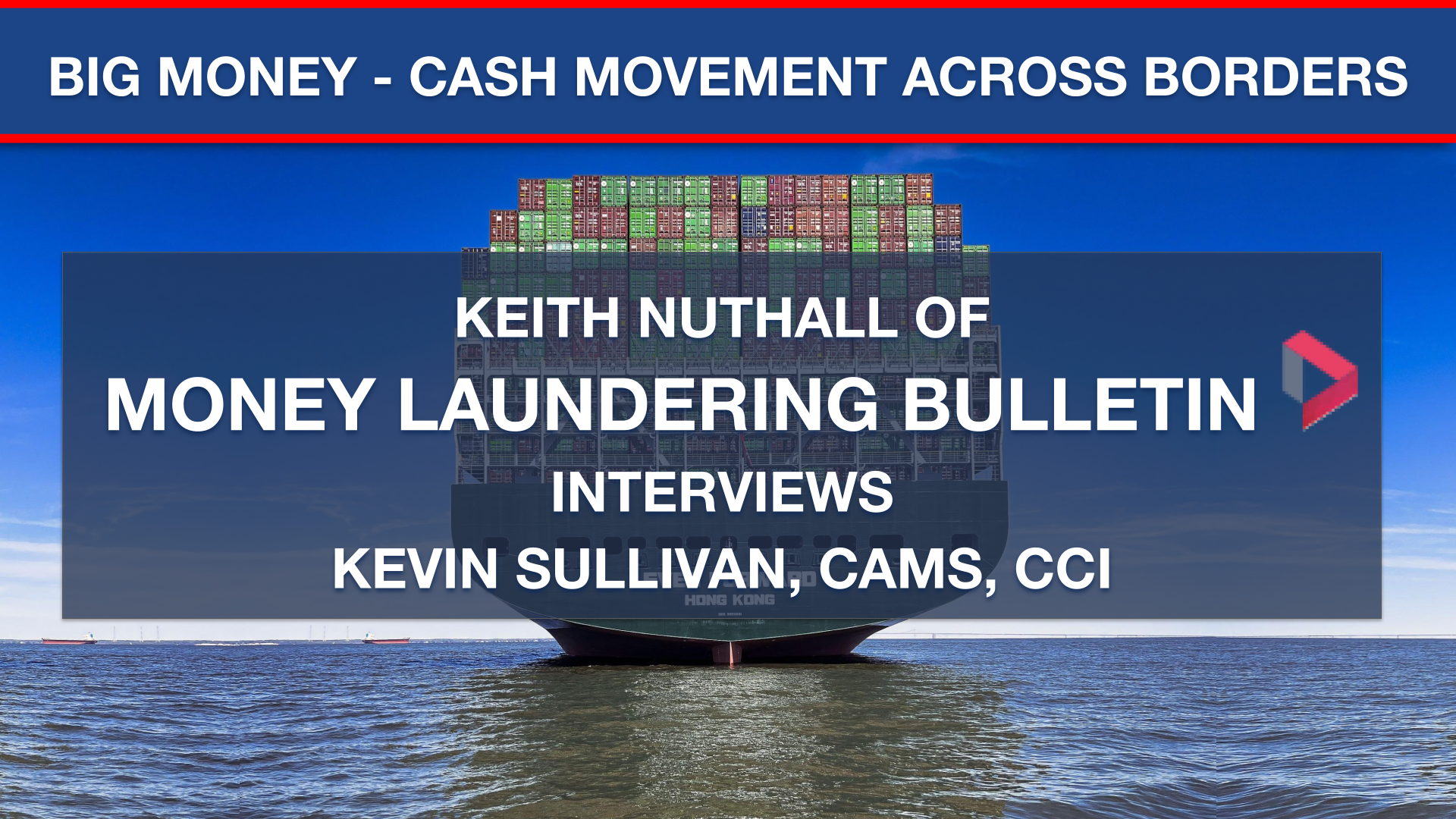 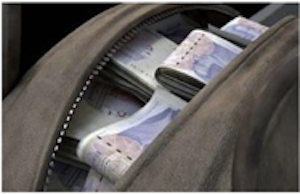 Kevin Sullivan, president of US-based The AML Training Academy and Advisory LLC, and former New York State Money Laundering Coordinator, said that, from 1 October 2020, to 30 September 2021, US$973 millions’ worth of illicit currency and assets were seized in the USA. He told Money Laundering Bulletin (MLB): “Cash can be hidden and moved in large amounts via commercial and private passenger vehicles, commercial and private airlines, boats, packages and pedestrians using hidden compartments inside their clothing or luggage.”

Southbound – US to Mexico

Andrés Martinez-Fernández, a former senior analyst at the American Enterprise Institute observed, in a 2021 paper [2], that reviews by governments and non-profits have concluded that bulk cash smuggling “remains a dominant drug-related money laundering typology employed by Mexican criminal organizations to repatriate drug profits from the US”. That means a lot of cash smuggling. Estimates of the value of Mexican drug smuggling vary widely but range up to US$39 billion annually. [3]

Sullivan noted that with “current record-setting numbers of illegal border crossings [by people seeking better life in the US], smugglers have more and more routes to take with less monitoring”.

Of course, bulk cash smuggling is a problem worldwide, with the UN Office on Drugs and Crime (UNODC) launching a regional initiative in February [2022] – ‘Combating Cash Smuggling in the Caribbean and Central America by Strengthening Operational Capability and Assisting Effective Implementation of FATF Recommendation 32 on Cash Couriers’. [4] It will include seminars and technical assistance for governments in a region that is travelled by cash couriers moving drugs proceeds from the USA to production bases in South America. Two seminars already held, in Jamaica and El Salvador, included gap analyses to identify regional governments’ needs to be addressed in further national workshops. [5] Among the weaknesses discussed were the poor record on catching cash couriers or smuggled cash in cargo in smaller ports, which proliferate in the Caribbean. Indeed, multiple ports of entry – and under-resourced law enforcement authorities – can make small jurisdictions, like Antigua & Barbuda, which has participated in an UNODC seminar, a sitting duck for criminals seeking to launder money through bulk cash shipments,

Like other island states, Antigua’s warm weather and blue waters attract luxury vessels. “Super yachts moving from A to B will have large amounts of cash on board [ostensibly to make it easier to pay for supplies and services]. It’s an area of interest to us and one we are still exploring and assessing how best to manage,” Lieutenant Colonel Edward Croft, director of Antigua’s Office of National Drug and Money Laundering Control Policy (ONDCP), told MLB.

Antigua’s residential harbor areas can also be easily exploited by bulk cash importers, said another senior Antigua law enforcement official, who requested anonymity. “The communities are designed to allow yachts to dock on private piers at their back door, just like you would park a car in your garage. This opens the door to smuggling,” he argued.

In theory, laws require anyone entering the country’s waters – at any of the four legal seaports of entry – to stay onboard and offshore until they have cleared customs. This must be done within 24 hours of arrival, with heft penalties for non-compliance. The absence of adequate camera surveillance, however, means that not all play by the rules. Weaknesses in the system are exacerbated by limited Antigua and Barbuda Coast Guard resources – the agency has only one vessel although efforts are underway to acquire more.

It is not only seaports that can be abused by bulk cash smugglers. “People arriving by air have occasionally used creative methods to transport cash in bulk,” said the Antiguan law enforcement official, “We have found it in false bottoms of suitcases in the past. Sometimes people have had cash strapped around their waist.”

The absence of full-body scanner machines at Antigua’s V. C. Bird International Airport helps travelers hide concealed cash. In one case, a man was found with more than US$75,000, in multiple currencies, under his clothes: “Hand luggage does go through the x-ray, but money can be concealed in carbon paper to block detection. Still, a good customs officer would see a dark mass and investigate,” the official explained. “We’ve even seen it in the soles of shoes. If you replace the lining and know how to compress it, you can get quite a bit in there,” he said.

Mr Sullivan said better resourced border control agencies such as the US Department of Homeland Security (DHS), US Customs and Border Protection and Immigration and Customs Enforcement (ICE) are developing new cash detection technologies but were understandably tight about releasing technical details: “DHS will use air-based technologies such as fixed wing, rotary wing and unmanned drones with various sensors to detect and track possible illegal activity. New ground-based technologies and tunnel detection also assist in developing intelligence,” he told MLB.

Some travelers simply choose smurfing, said Lt Col Croft, exploiting the rule that allows them to transport up to US$10,000 in cash into Antigua & Barbuda without declaring it. “We have had instances where people are traveling in twos or threes with each carrying just under the reporting threshold, so collectively they are moving more than the amount that requires declaration,” he explained.

Indeed, bulk cash interception can be an effective spur to further ML investigation. Martinez-Fernández said a review of case data by civil society group Mexicans Against Corruption and Impunity [6] found that nearly all ML probes in Mexico “were initiated after individuals were caught in flagrante delicto, or red-handed, by security forces, either transporting illicit cash or otherwise engaged in criminality”. They were not caught because of the analysis of STR,s (suspicious transaction reports) by the FIU. (financial intelligence unit), the Mexican Unidad de Inteligencia Financiera (UIF), said the group.

Antigua’s Lt Col Croft agreed that cash detection would certainly prompt questions: “Where you are coming from and what actions you have been engaged in would inform us as to whether or not it is suspicious. If you do not declare your funds when coming in, customs is required to investigate,” he said. “At the end of the day, modern banking systems have removed the need to carry large amounts of cash, so if you are a bona fide businessperson, why would you need to do so?” he asked.

“I believe all shipments should be analyzed by weight,” said John Zdanowicz, Professor Emeritus of Finance at Florida International University and president of International Trade Alert (https://internationaltradealert.com/), a consultancy providing compliance risk analysis of international trade transactions. “In the past I looked at the weight of some imports and found some abnormalities.”   Where cargo is unusually heavy, it may include concealed cash, he said. Among the irregularities, Zdanowicz found: coffee imported from Indonesia into the USA weighing 1.26 kg per declared kg unit; sweaters imported from Germany weighing 4.75kg/unit; and travel bags imported from France weighing 38kg/unit. As with all trade statistics, anomalies do not prove wrongdoing, but bear checking out, he said: “In all these shipments there was something more in the cargo than the products being shipped; could be cash, gold, weapons of mass destruction, fentanyl…? Customs authorities should check for abnormal weight,” just as his trade-based money laundering analysis looks for abnormal prices.

“Some bulk cash is simply flown out of the country,” said Zdanowicz, for instance, from Miami to the Caribbean. This the method chosen by former British Virgin Islands (BVI) Premier Andrew Fahie, arrested in Miami by US federal drug officers on 29 April [2022], and charged with cocaine trafficking and money laundering conspiracies. US police allege an accomplice was to pick up US$700,000 in cash on a private jet at Miami – Opa Locka Airport, to kick off a deal involving the shipment of tons of Colombian cocaine to the US through BVI ports.

Mr Sullivan said the challenge of hiding large amounts of criminal cash means it is often converted into precious metals and stones before being moved. It makes sense for a launderer to convert (refine) heavy bulk cash into easier to conceal items such as diamonds for smuggling purposes,” he said, noting, “One million US dollars in twenty-dollar bills weighs 110 lbs [pounds] and, if stacked, would tower 25 feet into the air.”

As for practical solutions, Mr Sullivan said that increased links between law enforcement and AML officers in financial services would help pinpoint bulk criminal cash flows. “Financial institutions should know the red flag indicators such as funnel account activity where a nominee may use structured deposits in multiple locations and similar structured withdrawals in different locations, particularly near the border. Sooner or later, the bad guys will use the traditional banking sector,” he said.

Freight forwarders handling cargos that could potentially include illicit cash should be subject to AML controls, he suggested: “I would love to see this sector regulated, or at minimum, educated, as there is a lot of room here for money laundering. As the volume and speed of global trade increases, identifying trade-based red flags and reporting the same via a SAR could have significant impact.”

And law enforcement would develop better intelligence on all bulk cash movements through coordination with foreign agencies: “ICE’s Trade Transparency Unit does a great job with that and I’m sure they could benefit from having more agents,” he suggested.