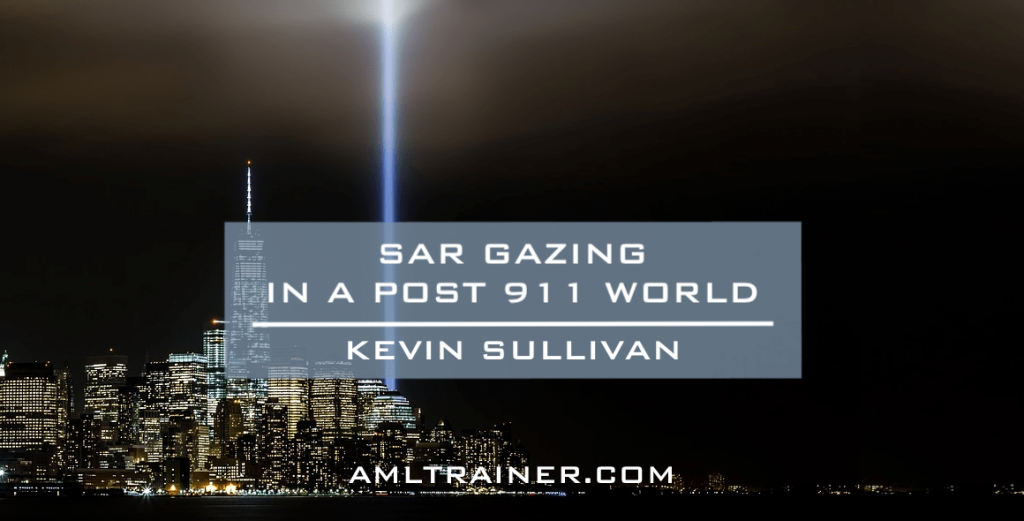 On this, the 18th anniversary of the 9/11 attacks, I reminisce my experience and consider where the financial community is today. As an Investigator with the New York State Police detailed to NY HIFCA El Dorado Task Force, our offices were located at 26 Federal Plaza, just a few blocks away from the World Trade Center. For several months, every single day I was at ground zero, breathing the most hideous smelling air and observing the worst and the best of the human race. I feel that this would be a good date to mention something to the financial community that has been a misguided conclusion and I’d like to set the record straight. I hear more and more about financial institutions discussing what they perceive as the futility of SARs. Their conclusions are based upon the number of SARs completed in direct proportion to the number of cases/investigations/arrests by law enforcement. These conclusions are based upon available statistics indicating close to 2 million SARs completed annually and the perceived limited number of law enforcement actions. To be fair, that’s the only tangible information available to the financial community. I understand that economics, statistics and profit will always come into play, especially the more time that passes by since 9/11/01. However, what is not considered, and this falls under the category of “you don’t know what you don’t know”, there have been no major terrorist attacks on American soil since 9/11/01. There are many reasons for that, great work by our military is one and outstanding work by law enforcement is another. The work that law enforcement has done has been supported, in no short supply, by the information provided by financial institutions largely in the form of SARs. While a financial institution may hear a little about law enforcements investigations simply by receiving subpoena’s and national security letters, they do not know everything that is going on. For example, several SARs written by numerous financial institutions each may provide a small piece of the puzzle yet only one financial institution may ever hear anything in response. Further, the vast majority of potential terrorism cases are not going to be made known to financial institutions. There are many more investigative resources being applied to situations that will never ever be quantified in some statistical database for review by the financial community and/or the general public. If you really want to know if the writing of SARs has been a success or a waste of time/money/resources, all you have to do is answer one question. How many major terrorist attacks have been conducted on American soil since 9/11/01?

Please consider more than figures in a database and numbers on a page. Look around you. Are you and your family safe? Do you even worry about going to work in the morning?

Understand the efforts financial institutions have put into identifying potential suspicious activity is a necessary and prominent function that helps law enforcement keep us safe and will continue to do so.

Kevin Sullivan, MS, MMBA, CAMS, is a retired New York State Police Investigator and Federal Agent who dedicated his career to AML and continues that work through his company The Anti-Money Laundering Training Academy. Kevin coordinated all AML investigations for the state of New York while being detailed to one of the worlds largest AML task forces, the NY HIFCA El Dorado Intelligence Center. He helped develop and implement global AML guidelines and trained and advised all industries and government agencies requiring AML around the globe. He helped to write the certification testing program for the Association of Certified Anti-Money Laundering Specialists’ (ACAMS) and was the co-founder and former chair of their inaugural chapter which was in NY. Follow Kevin here. For more info or training and advisory help contact The AML Training Academy at: ☎ (855) 265-7700 | ✉ info@amltrainer.com.

Reserve a seat in one of Kevin’s live AML training webinars. Space is limited!

Pick up a copy of Kevin’s book “Anti-Money Laundering in a Nutshell: Awareness and Compliance for Financial Personnel and Business Managers” at Amazon, Barnes & Nobel, or Apress.