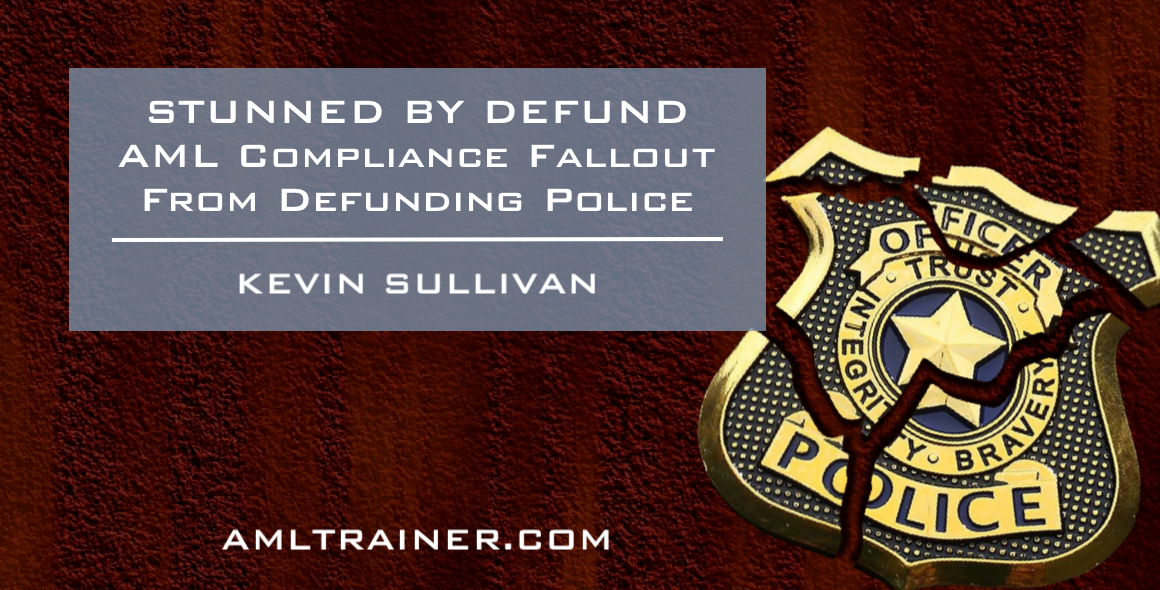 STUNNED BY DEFUND: AML Compliance Fallout from Defunding the Police

There are many topics that can be discussed under the defund the police umbrella, but, since I work in the anti-money laundering field and most of my social media contacts are in the financial crimes field, I’ll focus on how defunding the police impacts financial crime and anti-money laundering.  First off, I shudder to think about the possible damage to terrorist financing investigations if manpower is removed and/or eliminated.  We have been amazingly safe from foreign terrorist groups since 9/11 yet we’ve witnessed numerous attacks in multiple countries.  Do you think it’s just dumb luck there have been no major attacks in the US?  That comes from cooperation between law enforcement and financial institutions.  Ever since the introduction of the US PATRIOT Act shortly after 9/11, I have been reenforcing to financial institutions that law enforcement does read SARs and other required forms.  In fact, many police investigations that have uncovered criminal enterprises, terrorist activity, and affected arrests have come directly as a result of SARs submitted by financial institutions.  Further the information supplied via CTR’s, FBAR’s, and CMIR’s can be worth their weight in gold to law enforcement. The information in any of those forms may not have implications in your particular investigation, however it may prove to be valuable in other law enforcement cases that you are probably not aware of.  The intelligence gathered from a single SAR could prove noteworthy or be the missing piece of evidence in another case. Unfortunately, all that might change if there are less police personnel to review intelligence and act on the intel appropriately.

Money Laundering is Not a Victimless Crime

Some people will tell you that money laundering is a victimless crime, therefore not a priority.  Don’t buy into that erroneous concept.  Money laundering is the prize after committing a crime.  Without the money or financial gain, many crimes would disappear.  Do you believe drug dealing is a victimless crime?  Tell that to the thousands of families who have lost loved ones due to drugs over the years or as a result of the current opioid crisis.  How about human trafficking?  Arms trafficking?  I understand that money laundering is not as visual as fraud.  Money laundering is tough to see the connection between the crime and the money.  Sometimes when we don’t see something we don’t believe it’s there.  However, I assure you, evil exists and crime is the way evil is funded.  Organized criminal enterprises, drug trafficking organizations and terrorist operations are evil’s that law enforcement and AML efforts work diligently to keep at bay.  The estimated amount of money laundered each year…care to take a guess?  Approximately $2 trillion.  That’s a lot of crimes committed and a heck of a lot of victims.  So, when the police are defunded, and special details, units and task forces are reduced or eliminated, who will be investigating financial crimes? Who will investigate money laundering and terrorist financing?  We know that money is the goal of the bad guys (even terrorists need money to develop and carry out their goals.)  Perhaps we should all unite in a common battle cry of “defund organized crime,”  “defund drug trafficking organizations,” “defund terrorists,” or “defund anyone who would steal, rape, kill…etc.”

What If Police Departments Were Defunded?

If police departments were defunded one of the first things likely to be cut would be access to training.  As it is now, funding for training is almost always last on the list of items to benefit from an already challenged budget.  Not only does training cost money but because policing is a 24/7 365 a day operation, shift coverage becomes an issue, both in terms of manpower and in overtime.  Ironically, both sides of the defund debate have cited more training, not less, as part of the solution.  Yet, it would be on the top of the chopping block.  Policing is a complex, challenging, highly skilled, specialized job making ongoing regular training imperative. Imperative to the public the officers serve and to the very lives of those individuals who have stepped up to the challenges and dangers of being a police officer. What impact would decreased training have on public safety, on the skill level of the police force, on recruiting officers, on career growth, on keeping officers?

After training has been chiseled away, the next item up would most likely be the personnel assigned to various task forces and special details.  The reason for this is because the most important item on the police agenda is the physical safety of the public.  That usually means designating manpower and prioritizing calls for services that are reactive to current serious events and issues.  Uniform patrol is the mainstay of any Police Department because public safety will always be the top priority. There must be enough adequately trained and equipped police personnel to respond to active situations and conditions such as an active shooter at a school, serious crimes in progress, accident scenes, and emergency services, just to name a few.  After the physical safety of the public the next item on the police agenda is proactive policing. Proactive policing may include special details such as; financial crimes investigations, anti-terrorism, organized crime and/or gang units, etc. Unfortunately, proactive policing may be reduced and/or eliminated in order to supplement the manpower required to staff the front line responsive patrol positions.

Further exacerbating the situation is the lack of support from administrative officials, the potential of losing qualified immunity, minimal budgets, relatively low pay, oh, and lets not forget the fact that everyday you strap on a bullet proof vest and a gun because of the potential danger. Who would want this job? Would officers begin to retire at an alarming rate resulting not only in a loss of manpower but a loss of invaluable experience and brain power? How would this affect the recruiting process?  Add all these items together and you get a harrowing situation, ultimately forcing police departments to do less with less.  Defunding police will reduce financial crime resources and will also cause a dangerous downstream ripple effect to public safety in general.

What about the Feds?

Once the police are defunded, many of the Federal Task Forces that are supplemented by local, county, and state police personnel will either be noticeably reduced in manpower and/or they might even be disbanded.  Further, do you think the call to defund would stop at local, county, and state police departments?  There’s already been calls to eliminate ICE.  The lifeblood of drug cartel’s is cash, so defund policies could reduce those connectors between drugs and identifying their illicit profits.  Would we no longer need the Asset Seizure Team?  No Border Patrol, cash couriers would have a field day. Secret Service Electronic Crimes, let the cyber games begin!   Make no mistake, the Federal law enforcement community would be the next domino to fall and be called upon to defund and that too would have devastating effects on public safety

C-Notes Episode 1 – Why AML Efforts Matter
View the above video of the inaugural C-Notes podcast exploring the role of those working on the front lines of anti money laundering. Learn how the efforts of professionals implementing AML/BSA compliance programs helps to identify, investigate, and circumvent financial crimes and terrorist activities with retired State & Federal Investigator Kevin Sullivan, CAMS, President of The Anti Money Laundering (AML)Training Academy. This podcast reminds us how their work helps to safeguard each of our own doorsteps.