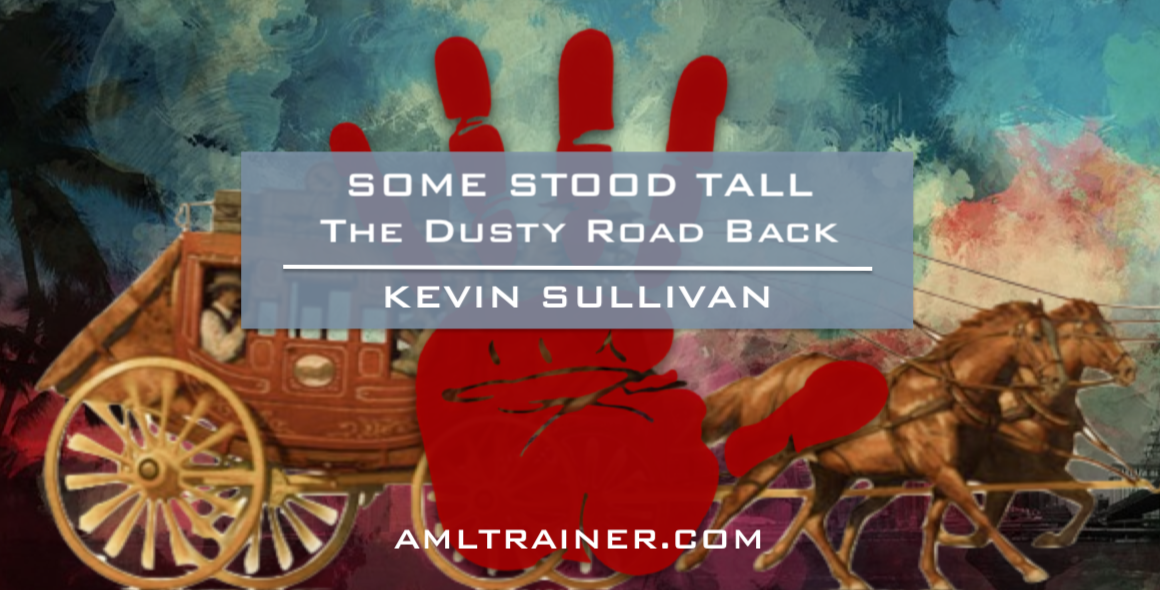 SOME STOOD TALL: The Dusty Road Back

The Damage of the Broad Brush

After reading the recent OCC report on Wells Fargo and noting fines of multiple top level executives for sales practices misconduct, it is very easy to become sour on the bank and paint all their employees with the same broad brush. The report notates a few of its personnel who were cited for driving the big red stagecoach off the road. Unfortunately, those implicated executives were high ranking, influential, and in a position to create the company tone at the top. (See my article “A Banking Sleight of Hand: Shell Game Bosses Fined”). But, there’s another group of employees that the report mentions. Bank employees who were bold enough and who stood up and said, “No! This is not right”.

It was determined that the root cause of the sales practices misconduct was the unreasonable sales goals and the extreme pressure placed on employees by certain top level executives to meet those goals. Supporting that, was the bank’s practice of terminating employees for failing to meet those unreasonable sales goals. This imposed extreme pressure on employees to reach the goals at any cost. Further, employees were terminated if they were discovered to be engaging in sales practices misconduct, yet they were threatened with dismissal if they didn’t meet the sales goals. This created a conundrum that if you didn’t meet unattainable sales goals you would be fired, and if you got caught in any misconduct you would be fired. That put the employees in an almost impossible situation. Unfortunately, this do or die mentality resulted in systemic illegal activity by some of the employees. Thousands of employees were terminated and many more resigned.

Truth Never Damages a Just Cause

Many employees routinely complained that the sales goals were unrealistic and unreasonable. Even after the implicated top executives were informed that the sales goals could not be achieved unless by inappropriate actions, employees were still threatened with dismissal unless they reached those goals. In spite of the situation continuing, the OCC report lists numerous incidents where various employees attempted to sound the alarm. Multiple employees stood up in the face of possible criticism, retaliatory actions and/or termination and showed a moral fortitude that the implicated executives at the top were lacking.

The report notes several senior level personnel expressed their concern that part of the internal investigation process was tainted by restricting the monitoring thresholds in an attempt to keep the amount of employees that were exposed for misconduct low.

The report details one employee who wrote directly to several of the implicated executives. This person stood up and stated loud and clear “this type of practice guarantees high turnover, a managerial staff of bullying taskmaster, and bankers who are really financial molester and cheaters.”

Another employee noted, “It lies on upper management who has increased the goals to the ‘must cheat to achieve’ level.”

Still another objected, “Make your goals at any cost? – I can’t sleep at night or look in the mirror.”

The report cites that the investigation of sales practices misconduct was tainted by the choice and style of investigation. An investigative report compiled by the banks Corporate Investigations department detailed the issues and recommended that the bank eliminate the threat of employee termination if sales goals were not met.

Senior Leaders: Taking Back the Reins

There were additional continued warnings from senior regional leaders, Corporate Investigations, and bank employees regarding this misconduct and its root cause.

The Chief Security Officer and Head of Corporate Investigations noted that sales integrity issues were the most prevalent and there should be continued focus in that area. The CSO also stated that “the number of employees caught and terminated for sales practices misconduct was just the tip of the iceberg due to the lack of robust monitoring.”

The head of Financial Crimes Risk Management (FCRM) stated that one of the implicated executives involved had been informed that applying restrictive monitoring thresholds that were only designed to identify the most egregious of violators engaged in sales practices misconduct, only managed the number of employees identified and not the total number of incidents. “It should have been managing sales practices risk itself.” The implicated executive responded that if the investigation was done the way the FCRM requested, many more members would be identified and they could not handle that volume. Even after the FCRM pointed out the sales practices misconduct, the root cause, and how the investigative process was limited and flawed, the practices continued.

A branch manager posted on Facebook, “Wells Fargo management have created a toxic atmosphere of sales goals that forces employees to sell products customers don’t want. They literally say, ‘every customer needs a credit card’…If there is ever a company as disgusting and unethical as this one, I dare you to find it.”

Light at the End of the Trail

Wedged between my anger and disgust at the misconduct of the sales practices, there is the realization that many people stood tall. There were employees and senior management at Wells Fargo that did understand the consequences of this wrong doing. Individuals who stood up even in the face of the threat of termination, and/or the loss of compensation packages. Thank goodness that the bank had employees who had the moral fortitude to speak up and say something. Without these honorable individuals who knows how far or how wide the scam and cover up would have gone and what other departments may have been infected by the disease of greed. It might not have felt like it at the time, but, in the end, and in moving forward, these truth tellers made a difference.

To those decent employees who stood up for honor and integrity, hopefully, the AML gods will look upon them with recognition and thankfulness. Perhaps that is already starting to happen. As those righteous and respectable current and former Wells Fargo employees roll out of bed today and head to their jobs, at Wells Fargo or elsewhere, they can take some solace in knowing that those who were responsible for the sales practices misconduct have been admonished, punished, and disgraced.

“Courage is being scared to death… and saddling up anyway.” – John Wayne