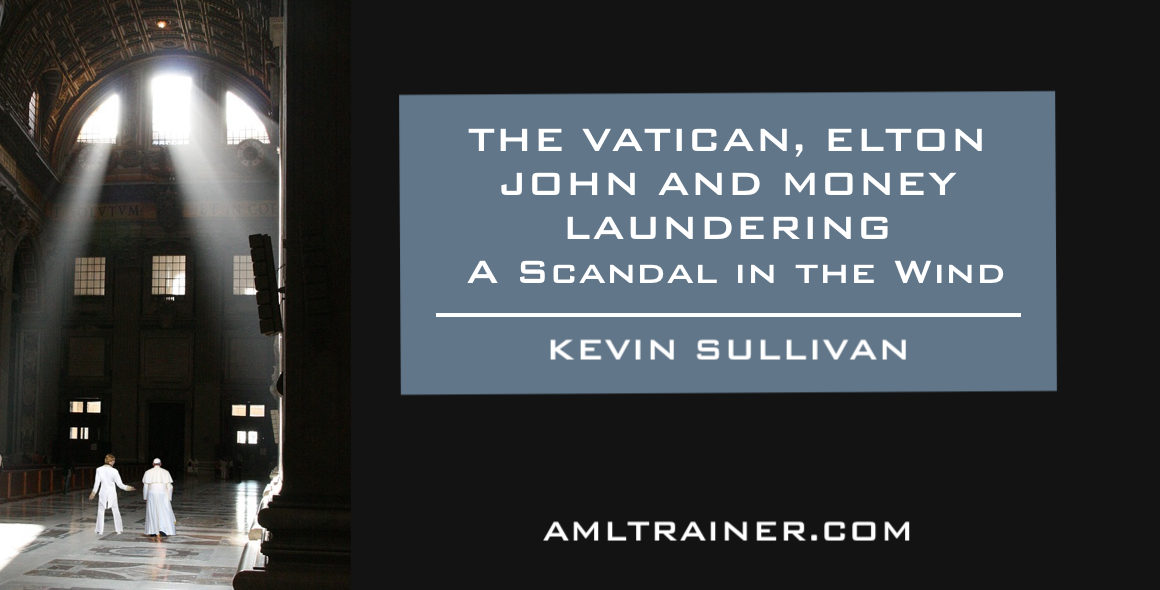 THE VATICAN, ELTON JOHN, AND MONEY LAUNDERING: A Scandal in the Wind

Recently Pope Francis ordered the investigation of the Holy See’s (Central Governing Body of the Catholic Church) Financial Information Authority (competent authority) located inside of Vatican City regarding money donated to the church in the form of the annual “Peter’s Pence” charitable project. “Peter’s Pence” is a once a year “special collection” to allow the Pope to respond to and care for those who are suffering as a result of war, oppression, natural disaster, and disease. However, reportably, 95% of the funds were used for other reasons rather than direct charitable functions with much of the donations being invested into a mutual fund. Subsequently, this mutual fund invested in many areas such as various Hollywood pictures which included “Men in Black International” and the Elton John biopic “Rocketman.”

When I decided to write this article I realized that I might be crossing some invisible taboo line in the sand, meet a little resistance, and perhaps receive some pushback via something quite minor such as the threat of eternal damnation in the fire pits of hell. But I figured I was a cop in New York, I grew up in the Bronx, and I was even an Altar Boy, I can handle a little heat. Besides, after sixteen years of Catholic schooling, who better to broach the subject and talk about a man, adored by millions, dressed in interesting vestments and wearing a unique hat. But enough about Elton John, let’s talk about the Vatican!

On the surface this donation incident may not seem as problematic as some other recent church scandals, however, because of other church scandals any illusion of impropriety is heightened. It certainly is no surprise to discover that many charities only dedicate a small portion of the donated funds to the actual cause with much of the funds going towards salaries and marketing. I can’t help but think of those 2 am commercials on TV with the sad music and pictures of some half blind, three legged puppy shivering in the cold as I run for my checkbook. But, we all know, only a portion of my donation will actually go towards taking care of the dogs. So why would we believe that The Vatican charities would operate any differently?

The Vatican bank, like any other bank, makes investments with their money. Legally, there is nothing wrong with the Vatican attempting to multiply their coffers with smart investments. But, a couple of touchy issues are at play here because it is “The Vatican”. The first issue being, are the people that donate to the charity aware that their donation is not necessarily going directly to the needy? The second issue to note is a moral conundrum. This involves the type of investments that were deemed acceptable, specifically investments in companies that make R-rated movies. While this incident in and of itself may not be the sign of the apocalypse, it is a particularly sensitive and emotionally charged incident because of the moral implications and also due to past Vatican Bank transgressions.

You Can’t Run A Church On Hail Mary’s

In the 80’s The Vatican Bank withheld transaction information from regulators due to its sovereign state status. The church was the largest shareholder in Banco Ambrosiano, Italy’s second largest bank, which moved its funds into illegal offshore accounts and was the subject of a massive political corruption investigation. During the investigation one of the directors of Banco Ambrosiano stated that “you can’t run a church on hail Mary’s.” Robert Calvi, who was the chairman of the bank reportedly had connections to the mafia and due to his association with The Vatican Bank, was referred to as “God’s banker”. Banco Ambrosiano subsequently folded after Calvi disappeared along with $1.3 billion. Later, Calvi was found hanging from a bridge in London weighed down by bricks and with 15,000 GBP in his pocket. The day before Calvi was discovered, his secretary apparently committed suicide by jumping out the bank’s fourth floor window. Questions abound about these incidents. Namely, were both these suicides or homicides?

In 2013 the senior accountant that handled the Vatican’s property and stock portfolio was arrested for attempting to smuggle 20 million euros in untaxed cash into Italy as part of a tax evasion scheme. Ultimately this accountant was acquitted of corruption. Unfortunately, there are numerous other suspect issues involving The Vatican Bank.

The latest report from the Financial Information Authority (FIA) states that in 2017 there were 150 SAR’s completed. A Moneyval (the committee of experts on the evaluation of anti-money laundering measures and the financing of terrorism) report noted that since 2013 only 69 reports by the FIA were made to Vatican prosecutors and none have been proscecuted.

Now back to Elton. As a huge fan of Elton, I am very happy to note that he had nothing to do with this or any known Vatican financial crime investigation. It was just a matter of circumstance that the mutual fund the church was investing in was, in turn, investing in various ventures, one of which was the financing of the Hollywood movie “Rocketman”. I guess that’s why they call it the blues.

Additional Articles That May Interest You

For more info or training and advisory help with your AML program contact The AML Training Academy and Advisory LLC at: